I don’t think there’s anything quite like the Indian Trains, and if you try to take it without knowing anything, you’re in for a good ride, earning yourself a tale you’ll live to tell again and again – like me. :S Depending on the place you take it, the length of your ride and your budget, you’ll end up with a wholly different experience!

As a true blue budget traveler, i tried travelling on the general class. Cheap as chai, it can be less than US$1 for trips that are a few hours long stretching over hundreds of kilometers. An epic good deal was all that’s in my mind when i bought the ticket (without reading lonely planet). i reached the platform 5 minutes before departure and for those of you who’ve tried it before, you know that was incredibly foolish. 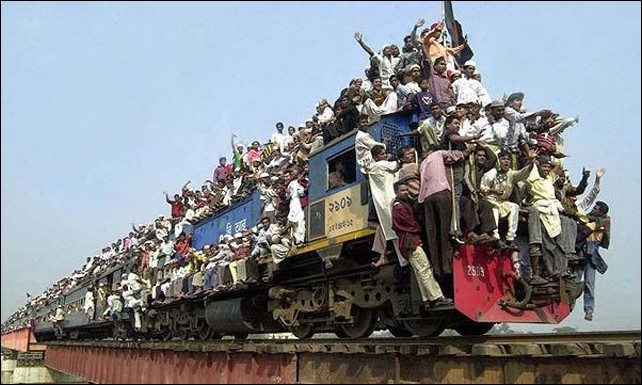 This is real. And it’s no joke.

I always thought this photo was fake. It wasn’t. And i saw it for myself. With my giant 70L backpack, there was no way i was making it in. So that marked my first experience with the Indian trains.

This pretty much summed up my 1st Indian Train experience

Wising up, i checked Lonely Planet before taking my next general class ride, and with the detailed instructions, i was able to board at a less crowded station, stand at the door in advance before everyone rushed towards the train, only to find out being inside of this train doesn’t make you much better off :/ 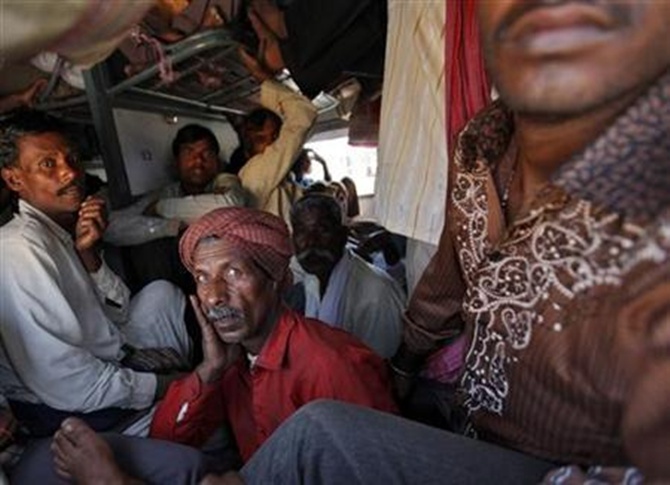 Getting inside doesn’t make it any better

This is the quintessential Indian train experience though, if you want to say you’ve done it, do this. And Lonely planet does a pretty good job of getting you inside there. How to deal with the bodies squished against you, legs dangling from above, nuts being peeled in front of you and thrown all over the floor, the permanent smell of cloves chai and curry, is however not included in the price of a Lonely Planet guidebook.

6 hours later, i emerged. Victorious but deflated, unscathed but unsavoury and with trembling hands i struck it off my bucket list. NEVER WILL I DO IT AGAIN!

Or so i thought.

Being in remote areas of India really requires you to be pally with the train system. And before long, i was rummaging through my LP guidebook on an alternative way to traverse the railways, if there was ever another way. Interestingly, amazingly, I did find a second way in the book, while looking for a way to get the Jodhpur from Ahmedabad.

“Take the first class if you have the budget, the overnight journey to Jodhpur from Ahmedabad is perilous and anything lower than first class sleeper you take it at your own risk”

(Obviously it wasn’t written with as much flavor as this, but i can’t remember since i was thoroughly inundated with such a spread of flavorful curry spices – This is what i remember from memory)

And the first class sleeper obviously didn’t come cheap, it was almost US$300 for that trip, and you had to book way in advance. (This was back in 2008). After convincing myself of the endless merits of that first class sleeper cabin, i resolved to buy it, only to be told ” Sorry sir, not available. general class available.” Complete with  the obligatory head shake, friendly smile and a moustache flick.

I was not ready to face my fears again, so soon after just escaping from it, so i dug deeper into the guidebook for a solution. Again, they did not disappoint. I wonder how the writers know what we readers are looking for. Something as obscure as this: not first class, not general class, not any class,  but still want to be on the same train for a good price. Here’s the advice (again whatever i remember)

If you can’t get up the general class and are unwilling to shell out big bucks for that sleeper, do this: Go up the 1st class section anyway, try sitting on the seats on the alley, if you get chased away, try sitting in the area between 2 train cabins – near the toilet, but take care. You might have to pay a fine but its still worth it.

So i did that. As expected, got chased away within an hour or so. It was good while it lasted. Leather seats, snacks and chai coming to you. Spacious, complete with a little table and storage for baggage. So I was relegated to the area near the toilet. And i soon found i wasn’t alone! People started streaming in, and i was pushed closer and closer to the toilet. “Take care of the stench” these words from the guidebook rang louder and louder in my head.

And at one point it seemed like everyone who tried this method were all assembled here already, and then the conductor made his grand entrance, and asked everyone to pay up. It was half the price of a first class seat, expensive, but still better than the general class and as expected.

Then the unexpected happened. The toilet started leaking. Unidentified liquid flowed out and emergency protocol made me sacrifice the first clothing i could get from the top of my backpack. And then the second piece. And then the third piece. The stench was at this point inconsequential, and everyone in my compartment was looking at me with anxiety – I was the first line of flood defense. If my levees break, everyone gets it.

Lucky it didn’t. And again i got to my destination. Courtesy of my battered Lonely Planet India Guidebook, but not without a heavy price, especially psychologically.

Still, you really can get what you are looking for, no matter how obscure it was. Without it, i probably wouldn’t have made the trip at all. So well.. Although it was many years back… and we don’t use LP so much these days with readily available internet and smartphones… still.. Thank you Lonely Planet! I’ll miss you.

The rider of ox-carts, tarantula-eating, giant crossbow toting founder of Backstreet Academy. Let me know if you have a challenge to add to that and I'll gladly oblige! :)

The rider of ox-carts, tarantula-eating, giant crossbow toting founder of Backstreet Academy. Let me know if you have a challenge to add to that and I'll gladly oblige! :)

Pioneering #ImpactTravel
Do good as you travel simply by enjoying local, unique and meaningful experiences!
Bookings ⤵